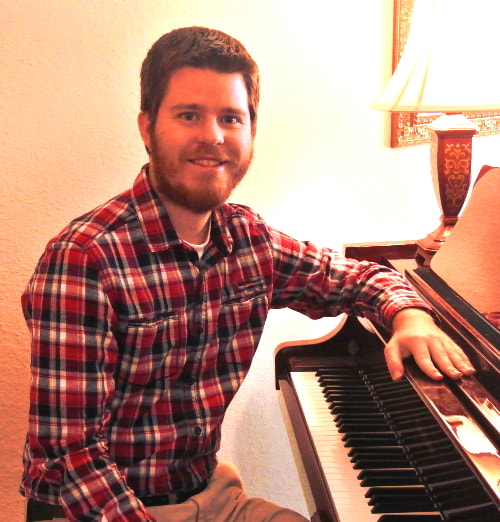 Greg was born in Sachse, Texas, as the youngest of four children.  From a young age, he was full of energy and creativity, doing things such as turning tinker toy cans into drums.  He began his formal music journey with percussion in middle and high school, where he played in concert band, marching band, and qualified for 1st chair in the all-city band one year.  During this time, he also sang in choir.  At home, his dad always had a guitar around, so Greg starting learning chords on guitar as well.

He transferred his mallet percussion knowledge to piano, and began to experiment on the piano.  While in high school, he also picked up violin. He quickly fell in love with strings, especially the ability to improvise with stringed instruments.

Greg begun to use his creativity and knowledge of many different instruments, to compose pieces using software on his computer. He was accepted into the University of Oklahoma music composition program, and  enjoyed the music theory, music history, private piano, voice, guitar, and conducting classes tremendously.  However, he did not care for the atonal focus of the composition program at OU, so he transferred to Oklahoma Wesleyan University. Here he studied music in the context of worship, and music education, eventually graduating in 2014 with a BA in general music, with a piano emphasis (his senior recital was a combination of  classical piano and some voice selections).  Since then, Greg has taught private lessons and pursued songwriting as well. He loves to convey musical concepts and knowledge to his students and gets great joy passing on the beauty of music to others though his teaching, compositions, performances, and producing. He enjoys communicating musical concepts in a professional, yet fun way.

Greg is married to his love Isela, with a young daughter,  and a baby on the way! He is fluent in Spanish (Greg es fluido en espanol), enjoys  designing and building websites in his spare time, and looks forward to his bible study group every week.

One of his favorite quotes is: "Greater love has not a man than this: that he lay down his life for his friends." ~ Jesus.