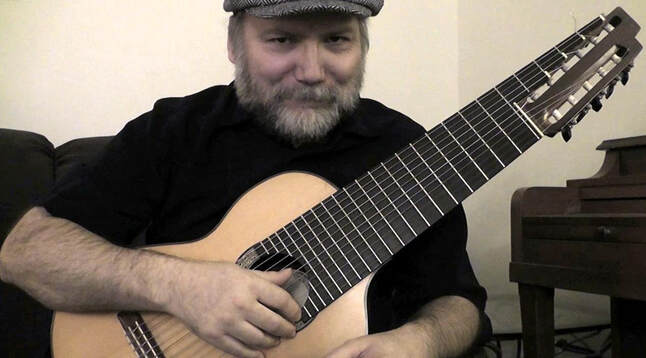 John Francis is a guitarist, composer and entrepreneur from Kansas City, Missouri. He currently resides in Wichita, Kansas where he teaches, performs and directs the Wichita Guitar Society. John is known for his eclectic compositional style and use of extended range guitars. As a composer and arranger with over forty years of musical experience, he has written and arranged music in many styles. His primary emphasis has been the guitar in all its varieties, including multi-stringed instruments. Equally comfortable in classical, jazz, folk, and pop traditions, his solo performances may contain both, original works and covers. His work has earned international praise among classical and fingerstyle guitar communities.
​
John began his study of guitar at the age of eleven, by fourteen he had begun composing and arranging. He began teaching privately at the age of twenty and has continued part time, since those early days. He has taught children in small classes and led larger workshops for adults. He often tailors his curriculum to fit an individual student. He has written and developed much of the teaching materials he uses. John holds a Bachelor of Arts in Communication, magna cum laude with a minor in music composition from Wichita State University. As director of the Wichita Guitar Society, he has had the honor of presenting dozens of the world's greatest guitarists in concert and masterclass.

​“From the simplest melody and rhythm, to the most complex harmony and counterpoint, I believe that music has the ability to captivate the spirit. For me, one of the most unique and important aspects of music is its ability to communicate without words. I try to express something genuine with each of my compositions and performances and pass on that ability to my students."